What My Dad Taught Me About Tech 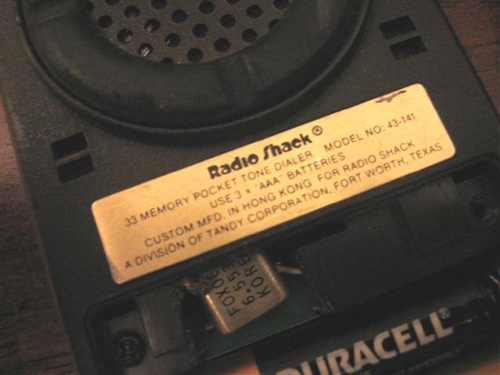 Not the exact same dialer my father carried, but pretty close. (Via PhishMe.)

Note: This post inspired by Gizmodo’s feature on what our dads taught us about tech.

My father didn’t enjoy gadgets for gadgets’ sake. He bought fish from Nova Scotia, Iceland, Florida, and other places a long way from our home in upstate New York. He and a handful of employees cut it all up and sold the filets. He grew up in rural Long Island, then on a working upstate farm, and couldn’t type beyond finger pecking. Still, the very first device I can ever remember thinking was amazingly cool–or whatever equivalent of “cool” a 6-year-old had in the mid-1980s–was a tiny device he held up to the phone receiver at five in the morning.

It was roughly the size of today’s iPhone, though small in my dad’s gargantuan hands. The label read “Radio Shack,” it was sharp-edged and brown plastic, and it had a big speaker under its flip-open cover. If you slid open the case in the back, there were lots of switches, and maybe even transistors. The main magic, though, was when my father would pick up the kitchen phone handset, hold the speaker up to it, and generate a series of squawks and beeps. When the analog argument was over, he’d maybe punch in a few numbers, then put the device away and start talking. “Jim? Rick Purdy. I need Icelandic Cod by Thursday …”

I picked up my tech obsession, indirectly, from my dad’s cast-offs. After he sold off and closed Statewide Foods the first time, to try a white-collar job and spend more time with his kids, I inherited his office’s bookkeeping computer. It was a Gateway 486DX-33, “Turbo” switch and all. I installed Windows 95 when it arrived from a dozen or more 3.5” floppy discs. I upgraded it with a CD-ROM (4x) and sound card (Creative, 16-bit) for proper gaming capacity, but then had to check out every single Windows setting, BIOS switch, CONFIG.SYS and AUTOEXEC.BAT script, and potential hardware problem when System Shock wouldn’t stop crashing with a terminal-type “Divide Overflow” message. In the end, the culprit was an obscure BIOS setting that put the hard drive into a necessary “Turbo” mode. I will never again buy, name, or accept anything in my life with a “Turbo” label–ever.

Cut to 2010, and I’m a 29-year-old writer who earns his wages detailing the kinds of work-arounds and system fixes that filled my formative years. Interviewed by the local alternative weekly, I brought up that brown box of my father’s. I mentioned it again in my next phone call with my father, and he explained the mystery I’d managed to never directly ask him about.

The device was a Radio Shack tone dialer, and he discovered it in the world of long-distance brokers. It was a kind of “red box” phreaking tool. Rather than pay then-monopoly rates to AT&T;/Bell/NY Telephone for long-distance calls, the tones and squawks from the device activated something deep within the local phone switching station, which in turn connected and authorized him to use his own much cheaper carrier to call Iceland, Canada, or wherever he needed fish from.

The conversation about the “brown box” was the last I’d ever have with my father. He passed away on March 23, 2010. A heavy manila envelope had arrived four days earlier. Inside was a brown, dust-flecked device, with a speaker and all the switches still set up.

Every generation thinks they’re the first to stumble across everything. I’m typing this from a smartphone tethered to my laptop to avoid Panera’s unusable lunchtime Wi-Fi. My dad was sneaking around legitimacy to get things done long before his son.