Remember When It Used To Be Warm? 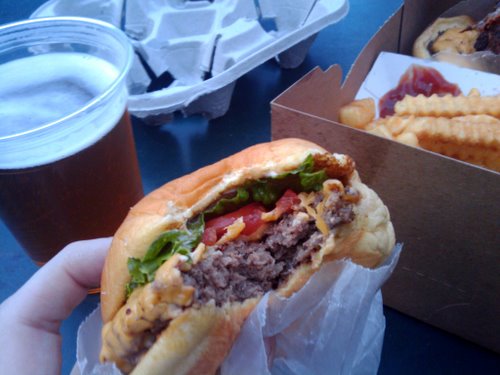 A single ShackBurger, crinkle-cut fries, and a glass of their own ale. This was a great moment to have a G1 camera handy.

I know it’s been a long time since I rapped at ya. Long time, like, since before the national health care debate started. Long time like, I still lived in Rochester. Long time like, everybody still thought the Bills had a great passing game ready to roll out.

So! Here’s the notable stuff. I’ll skip the minutiae of professional/Lifehacker-related material, since I should really be a good “personal brand” and round that stuff up on the professional page.

Since you asked, yes, I find Season 2 to be vastly underrated, and Season 3 to be very loose and faulty at points, despite having two of the strongest plot arcs (Hamsterdam and Stringer Bell’s quest to “go straight”). I could certainly go on–and I have in the past–but let’s just say that I’m very eager to discuss this with you at any point when we meet. Midway through your surgery? Tie off that morphine drip, fellow watcher, and let’s get down to brass tacks.