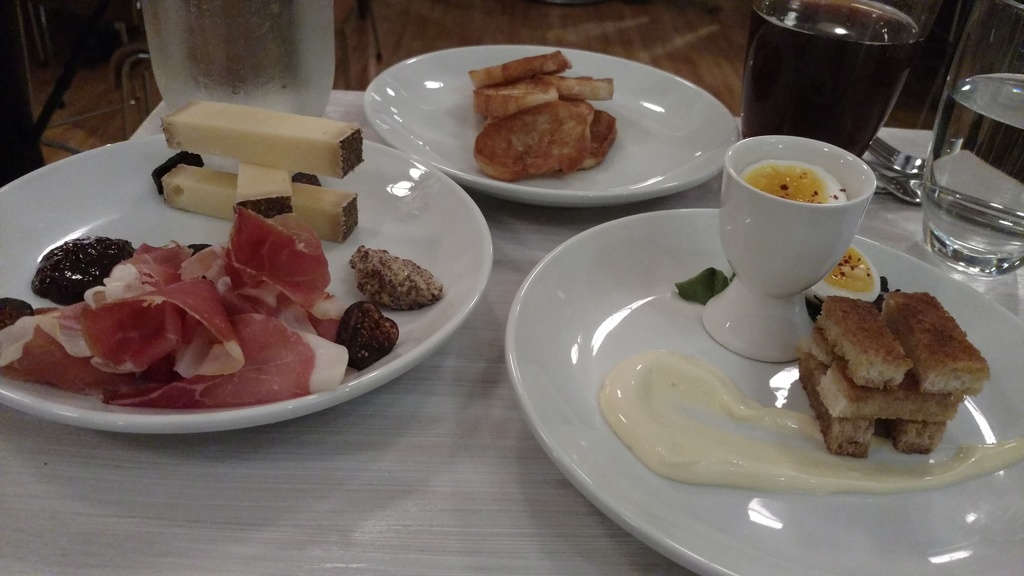 If you ask me, I think you should eat at Lait Cru Brasserie. I say that because, based on a recent trip, the food is only medium-fussy and very tasty, the servers are pleasant and eager to explain the stuff you dont’ recognize, and stepping inside this well-designed space with big windows is relaxing.

Why am I telling you this? That’s another story.

I have a fair number of Twitter followers. Most of this stems from my work at Lifehacker, a popular technology/productivity blog where I worked between 2007 and 2011. Some of it comes from other work I’ve done, mostly around technology, which is a popular thing to talk about on the web. From the few times I’ve looked through the list of followers, it’s revealed many Android enthusiasts, quite a few PR people, a lot of fake “bot” accounts, and, yes, some actual people who want to see my id on display. Some of them live around Buffalo, NY, where I live. I bet the majority of them do not.

I used to write food reviews and features for Buffalo Spree magazine. Sometimes it was easy to write about how a great burger tasted great. Sometimes a sense of dread stuck around for days, after I’d eaten a just-okay or mediocre meal at a small restaurant run by a decent family trying their best. It was great to get to know chefs and vendors and people devoted to making good food. It was not so great to feel like some folks only really had time for you because they could use a few more good words..

All that is to say, I’m still on some people’s radar, as a person whom might be able to influence folks about food. So whether it was the (very nice) owner of Lait Cru Brasserie, Jill Forster, or someone helping Jill promote her relatively new restaurant, I got an email asking me to eat there, document the experience, and hopefully share it with people. A good number of items my wife and I ate and drank at Lait Cru were taken off the bill. I added a good deal back in gratuity, but I’m sure I ate some stuff for free.

I’m rusty at food reviewing, and I don’t want to overwrite this (MORE THAN I ALREADY HAVE), so just a few highlights here. Jill, who ran Nickel City Mercantile & Cheese on Elmwood for years, knows cheese, and you should absolutely order from the little sub-menu of meats and cheeses. You can get two meats and one cheese, three cheeses and zero meats, whatever you want, served with little toasts. Our server explained the options, we found a few we liked, and, do you like meats and cheeses? Cool, let’s move on. The arctic char I ordered had the most crispy skin I can ever recall eating on a plate of fish. My wife’s steak frites were quite good; if you’ve had steak frites, “quite good,” you know, is just fine on a Friday night. 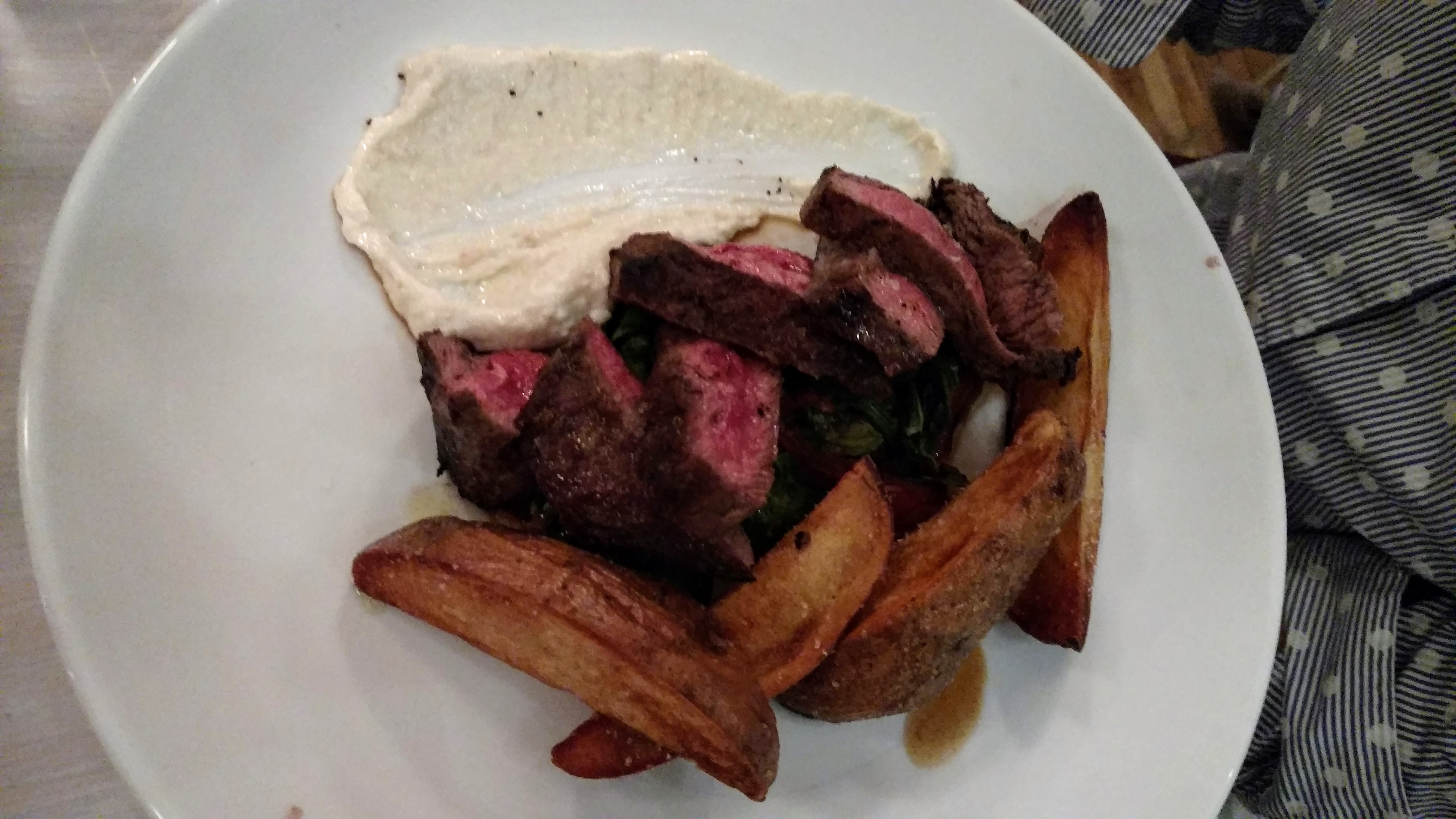 I dug the very restrained but wide-ranging beer and wine list. They had Lord Hobo brewing’s Hobo Life, which is a session IPA that feels like much more of an indulgence. In fact, the whole menu is like this―just a few options, but good options. If you brought your mom or dad there, and your mom or dad had raised you in the suburbs and never went out to eat because they knew your college was going to be so damned expensive so their experience with restaurants is very limited and they have no idea what arctic char is? I think mom or dad would still do well here.

I don’t begrudge any restaurant owner their efforts to get the word out about their place. It feels like the hardest marketing job there is, convincing people not only to eat a meal out, but to eat it specifically at your place, where they’re not 100% certain what they’ll eat or who else will be there. You’re not so much competing with other restaurants―Jill, in fact, is running Lait Cru a football throw away from her brother’s restaurant, Black Sheep. You’re competing against everything in people’s lives, and their habits, and takeout, and Seamless/Grubhub, and everything else that keeps people from trying new things that cost more than $10.

One of those things that keep people from trying new places is their friends. We all have opinions about restaurants that did us wrong, or sold us a pizza with a soggy crust, or this one time lost our reservation while we were starving before brunch. You go to work, you ask someone how their weekend went, and you get a miniature review of the place they ate at Saturday. Later on, your friend or significant other asks you what you want do for dinner that night, and you don’t know that you remember what your coworker said, but you do. It sticks with you, and you get subs at the grocery store instead. 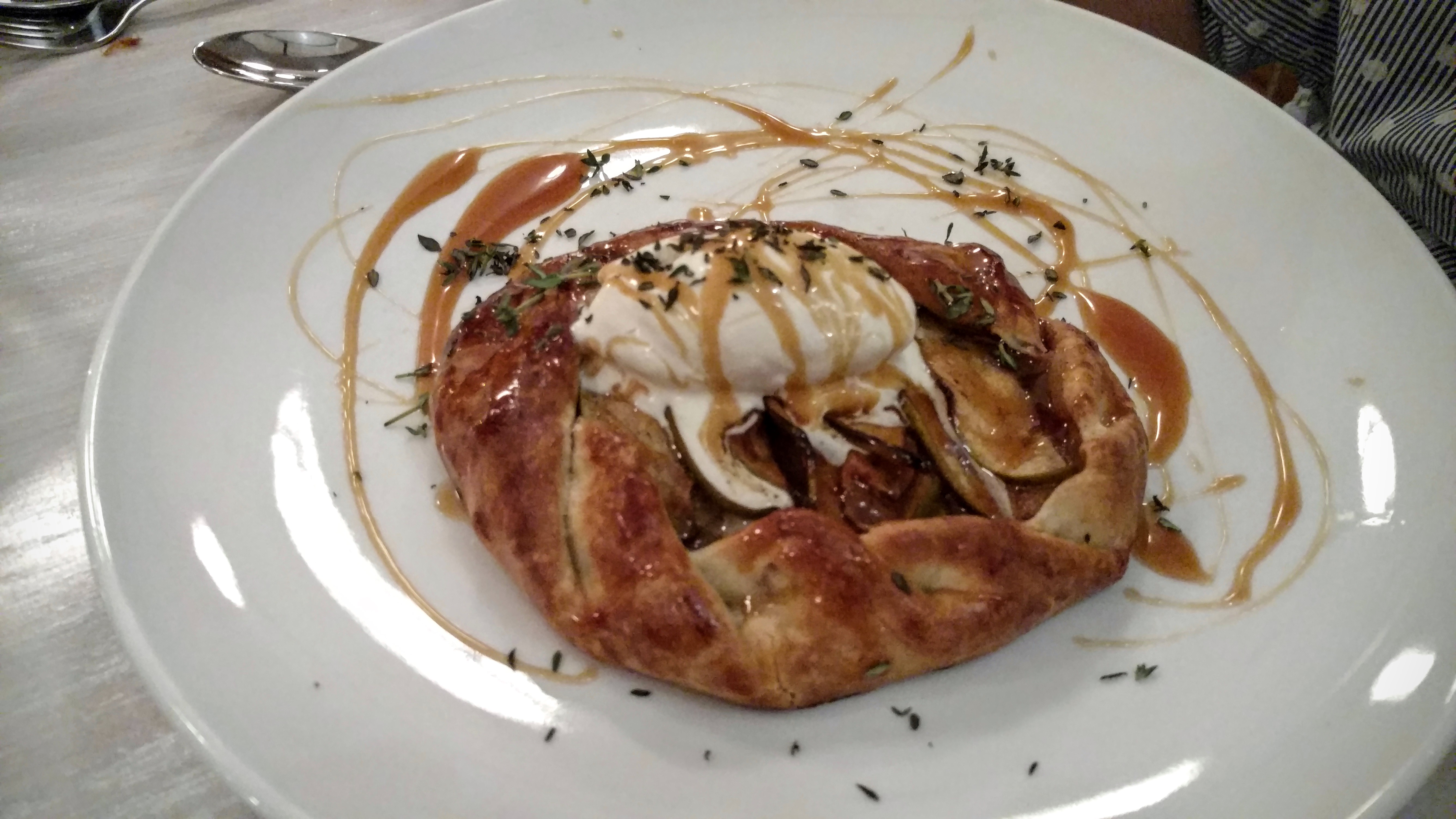 On that note, the apple galette we ordered had thyme sprinkled on it, and it was probably too much of a quirk, or just too much time. But it was pretty easy to scrape off.

I’ve received a few other requests to “share” about “experiences” as a private citizen before: Bluetooth headphones (Kinivo BTH420 headphones, they’re pretty good!), arch-support shoe inserts you order using your iPhone camera (ExoSOLS, they seem like good arch supports that will last a long time!), and a few other things. I felt better about this one, though. I have no reservations about telling you to try something new, to eat at a kinda-fancy place on the west side of Buffalo. You don’t have to go there all the time.

I’m trying hard not to be the friend who has the scoop on the best places. I just think it’s remarkable when anyone turns on their oven and hopes the food they make inspires other people to talk about it. Sometimes it’s just a business, but Lait Cru feels like a venture of enthusiasm.