One of Those Lazy "Looking Back at 2011" Posts (Except Unpaid) 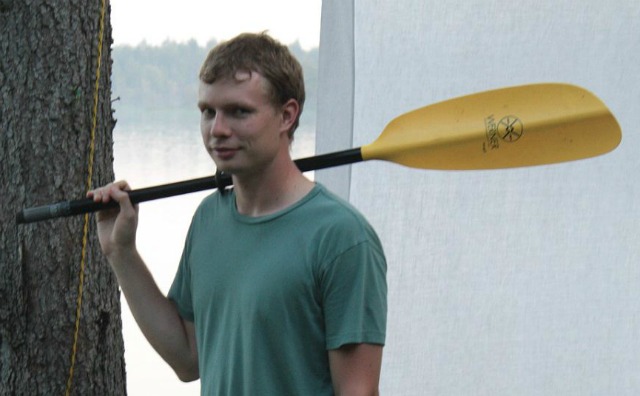 Look closely, and you’ll notice I’m holding only half a kayak paddle. Which could be a metaphor for how I feel writing about my own year in review. Yup. (Photo by Jennifer Phillips)

Man, this week was slow. This last week, the one between Christmas and New Year’s? Really slow. I never liked it when, as a reporter, sources would answer questions with, “Slow news week, eh?” But I’ll say it to myself. Nobody wanted to read much of what I get paid to write about this week. So I did what everybody else does and just ran out the annual clock with a year-end review. Of myself. 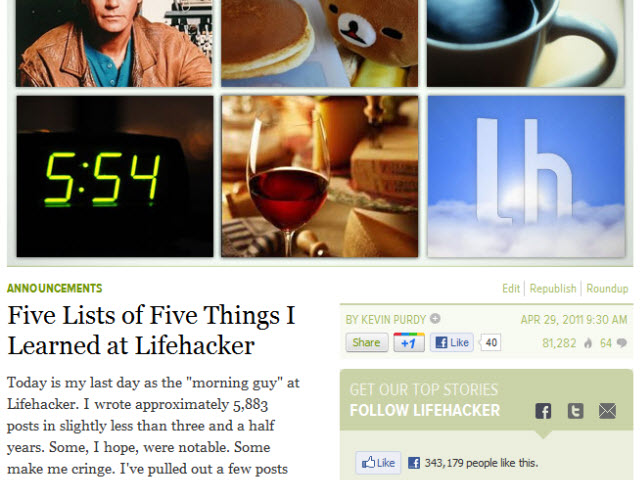 It was a big deal, stepping away from the job that changed my life. But after three and a half years of waking up early, scanning hundreds of headlines, and pinching five or six rapid-fire posts, plus a feature or two every week, it was time to go.

I’m really proud of the work I did at Lifehacker. I’m extremely grateful to Gina Trapani, Adam Pash, and Nick Denton for giving me the chance to write about topics I really enjoyed, for money, every day. I had a great crew of coworkers, almost always. And there’s no doubt that my time at Lifehacker, and the truly impressive spread of the site’s content, allowed me to start writing as a paid freelancer at a number of other web sites (along with the occasional return visit to pick up a day shift or two).

Then again, the weird thing about that kind of instant writing, about getting your hooks into topics the moment you hit them, is that it accelerates everything about the job, not just the word count. The reactions and results from your writing are seen and felt instantly. And if you’re not jazzed about what you’re writing about, give it 30 minutes, and you’re onto the next thing. But you also start to feel like you’ve “covered” something many, many times over. Like a political reporter inured to the same campaign tricks and scandals year after year, but in one-eighth the time.

After a year or two of writing for Lifehacker, I became my own worst enemy at feature pitch meetings–more self-antagonizing than usual, anyways–because I couldn’t think of anything that hadn’t been written. Anything respectable, relevant, helpful, it seemed, had been covered four times. There’s the general notion that there’s no such thing as new stories, just new writers. I think that’s true, and in my case, it became a good reason to move on and let some talented young guys get paid to write more.

Since I’ve yet to hit it big with my Fancy Coffee Illustrated app (wait, is he joking?), I took up a few offers to write freelance for web sites. Some of it is very much in the same realm as Lifehacker, but it’s usually up to me to pick the topics, the angle, and the depth. So it’s been fun to occasionally lean back in my Aeron knock-off, stroke my entirely non-existent chin hair, and scan past the immediate headlines.

So I wrote about my “knitting circle”, finding a job these days, and using caffeine strategically for Fast Company. I told the tale of how a small group fared with a free Google Apps installation at TechRepublic. And I’ve just started regularly blogging for ITWorld, where I’ve lately proven that even an Android guide book author can get fired up about bad moves by his bread and butter. 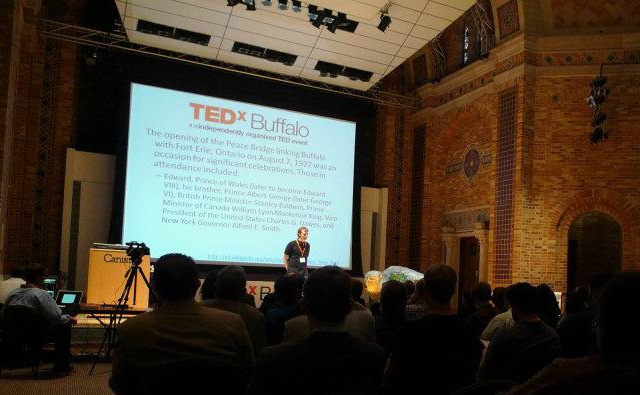 For the first part of 2011, I was an eager participant in TEDxBuffalo, an independently organized conference in the style of, and under license from, the global TED brand. The conference, as scheduled for April of 2011, didn’t happen, due to a key figure’s personal issues that I shall not dive into here. But when it came time to apologize to the stakeholders and possibly regroup, I found myself more eager, and more leader-ish, than I’d ever thought I could be.

Why? It sounds so idealistic now, but I thought the first outcome, the one where we tried, gosh dang it, but never quite got a conference together was just a terrible rap on Buffalo, and the associated crew. I kept thinking about what the web searches would look like. I’m serious. You know what I’m talking about: you’re wandering the web, and you suddenly come across the sad remains of a business, an event, a project–something where the last update was more than a year ago, and it’s about “Big plans for 2011!” or something akin. I really, really didn’t want people to wonder if Buffalo ever put on a TEDx event, and have the answer be, “Oh, kind of, I guess, but in a sad, bicycle-with-a-flat-tire way.”

I thought I’d long since grown the psychic armor to deflect the arrows of What People Might Think. But I couldn’t resist the urge to fire back and get at least one show done. The folks who put together this event made that show far greater than I thought it could be, and I’m freaked out about how 2012 might turn out.

Anyways, I wrote up a post-conference wrap-up and a “What I learned” post, and it’s hard to believe it went down just over two months ago. 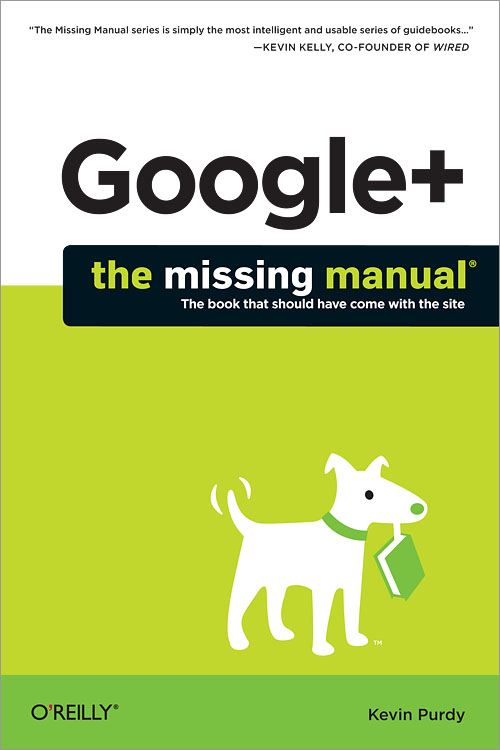 When I wasn’t making my friends sick of hearing about TEDxBuffalo, I was deflating all their remaining camraderie with grumbles about “the book.” The book was my second instructional tome about a Google product, after The Complete Android Guide, but this time published and edited by what you might call a more traditional publisher, O’Reilly Media. Even though O’Reilly is an innovator in many areas of the publishing field, it’s becoming a kind of standard-bearer for tech publications, and there’s a well-defined process for pitching, writing, and producing a book.

I was, to say the least, unprepared for the demands of this type of book when I started. You might also say I was spoiled by the Complete Guide process, which left me to make most of the decisions about organization, templates, copy styles, and other details. It took a good deal longer to write this book, and I probably ended up writing it 1.8 times, really. But I’m quite proud of the finished product, and I think it’s a real help for anyone looking to learn more about Google+.

It’s an ebook sold without any digital restrictions, with free lifetime downloads and updates, and easy transfer to any e-reader device, and I’m pretty sure the printed version will be very nice, too, in keeping with O’Reilly’s standards for putting out the best tomes around. You can buy a nice print/ebook combo at O’Reilly’s store, or buy the paperback at Amazon. 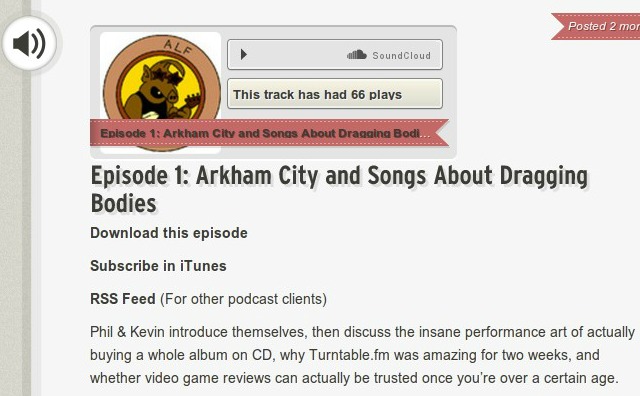 Here’s another thing that was hard to do this year: start a podcast. Not with Lifehacker, or O’Reilly, or from any other pre-existing platform I’ve lucked into. Just from the efforts of myself and Phil Dzikiy. It has been humbling, in all the right ways, to start from scratch, learning how to not suck at planning, recording, editing, publishing, and promoting a show where two guys you (probably) don’t know are trying to entertain you with takes on the news, not-that-young dude culture, technology, and other not-too-specific topics.

Phil and I work pretty hard at In Pod Form, though most of it doesn’t show, hopefully. We argue out topics, try to keep the show flowing, and, on the technical end, sweat the details as much as possible with our amateur recording and editing equipment. I clip out a few “Umms” and “Likes” where I can, and I try to keep it between 35-40 minutes per episode. We want to respect people’s time, and we provide all the links we talk about on our show notes.

It’s been revealing to see how hard it is to build an audience from scratch. And I mean scratch–if you have a cousin in South Dakota, they have almost certainly gathered more Facebook “Likes” than In Pod Form. But Phil and I are proud of each episode, we’re learning the ropes in a new medium, and heck if it isn’t great to have a mandatory weekly appointment to see a good friend. 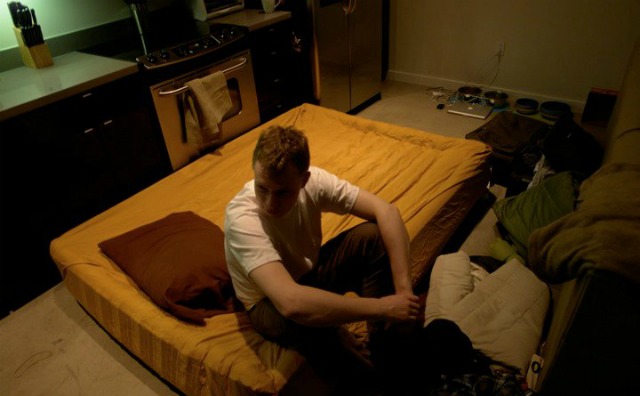 TripIt says that I traveled 0 miles in 2011, but I trust my memory more than their apparently twitchy API.

, ate at a number of wonderful spots, and got to see whether we actually laughed out loud when we typed “lol.” And, while I wouldn’t diminish a week spent in L.A. during a Buffalowinter, but Adam P. gave me an AeroPress

to take home, and it totally upgraded my life.

, but I got to meet up with Adam and Gina, meet some really neat folks from O’Reilly, and spent a good bit of quality time with Paddy Foran. Paddy even snuck me into Twitter’s headquarters for an impromptu lunch. And I finally had a chance to meet up with Pete, one of the my father’s unofficial brothers (long story), and it was just a great extended weekend.

, and where we watched a morning session of the Court. It was intense. And Clarence Thomas really does look very close to nodding off at times.

. Nifty. On a related note, I compiled my five favorite Longreads “of” 2011

come and go in what seems so quick a fashion, looking back. I think most of the Buffalo-area tech types I know think that a communal space for our projects, gatherings, and, yes, working can happen, but it probably needs to start smaller, and probably as an outgrowth of a tech firm that ends up with a little extra space on hand.

of our home ownership experience. I’m serious. I can definitely play this metaphor out and point out who the Phil Spector character was, if you’d like (you wouldn’t).