2017, as lived in and around the United States of America, kept asking us if we believed there were winners and losers. If we did, we then had to ask if the competitions that made them win or lose were fair. And then, ultimately, how much we were willing to do to change the competition, assist those on the losing side, or work with the people on the other side from us.

That’s about as clear and calm as I can write it, after quite a few tries. 2017 felt like a shift toward entire sets of U.S. people being ignored by the institutions supposed to benefit them: governments, small and national, employers, healthcare, schools, news publishers, environmental and safety watchdogs, to name a few. Some of it is political, although we’re the people who vote. Some of it is economic, although we’re the people who buy things where we do, if we have a choice. It’s a lot of “it depends” and “not everyone” stuff, hard to think about in clear lines and anecdotal narratives.

I’m a liberal, I was born in 1981, and I’m doing fine, by a number of common measures. I certainly intend to get more people registered to vote in 2018, in the big and the microscopic elections. If you’re a friend of mine, you’re going to hear about it. It’s the one thing I am absolutely certain will affect the big systems, if representatives feel like the people watching are more than just a few demographic slices. The other stuff? I don’t have a plan, beyond helping, donating, volunteering, as much as I can as a deeply imperfect agent of my own beliefs.

I’m sorry, your question was, “Hey, how was your year?” Yes, I have some sub-heds about that.

I can skip the usual tortured prose (2016, 2015) about my rolling mid-life crisis. I covered it in a talk at Creative Mornings, a talk about death, legacies, and fictional story structure.

Thank you to the Creative Mornings team for taking a chance on a guy who usually talks about search engines or journalism. It’s not a perfect talk, but there’s a lot of me in there.

Nearly 10 years ago, I bought a 1988 Schwinn World Sport road bike from Rick’s Cycle Shop in Buffalo. At first I rode it when it was warm, and generally on weekends, during the day. Slowly, I started riding in regular road traffic, at night, and even when a car was available. I did a few Ride for Roswell and SkyRide events. I got into biking, and learned how to do some basic maintenance: fix a flat, run a cable, wrap a handlebar.

One day, the local bike organization, GoBike Buffalo, announced that members could get their bike frames and wheels sandblasted and powdercoated. Having just done a guide to dog crates, I knew what that was! It was cool. While a 1988 World Tour could be a great-looking bike, mine was, uh, showing signs of wear. 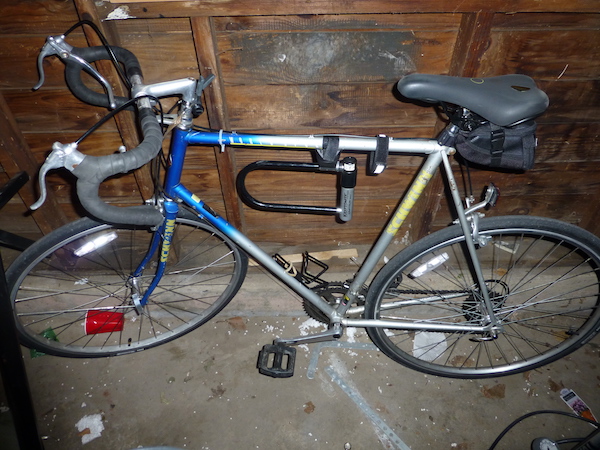 So I took the bike apart, with help from coworker Mike Mac. 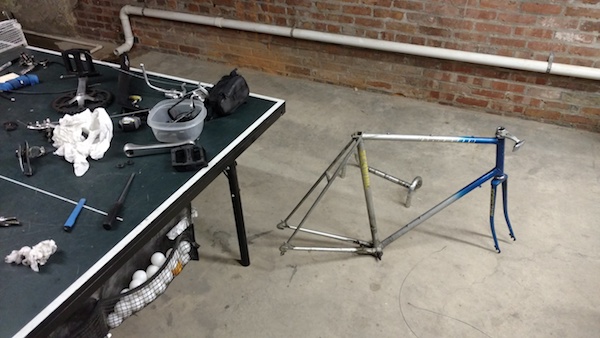 Turns out, if it’s going in a 700F+ oven, you have to take everything off: the bottom bracket, the fork, that relatively useless front reflector. And all the spokes on the wheels. I told myself it wouldn’t be that hard to redo it all.

I disassembled the bike the last week of July. I spent nearly every Sunday, and a few Tuesday or Thursday nights, from then until late-late fall, at the GoBike Community Workshop, learning how to build a bike from scratch. I rebuilt the wheels and trued them, and retrued them, and trued them again. I learned that you should measure everything before you remove it. I got intimately familiar with how ball bearings should feel, spun by an axle, packed with grease.

In the end, I got this guy all but finished, and ready for spring: 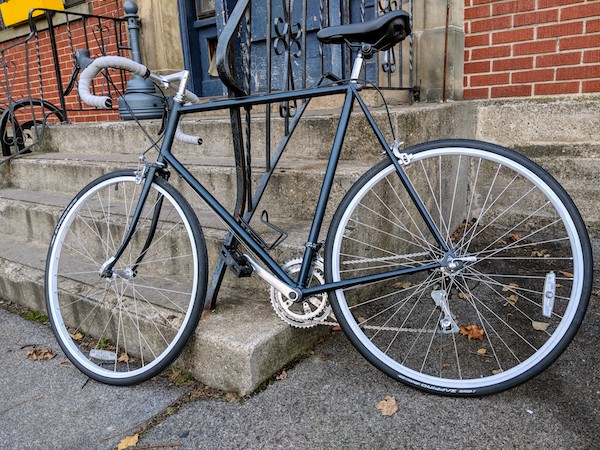 I could not have done it without the help of the people who run and frequent GoBike’s workshop, the encouragement of Mike Mac and my bike-savvy coworkers, WBNY for the Sunday tunes and, above all, Sheldon God-damned Brown.

But that was not the end of the dive into biking―oh no, a few more levels deep, here. My wife and I decided to sell a car and go down to one. It helped that ride sharing had come to upstate NY. But it meant that, should I want to get somewhere while the wife had the car, I was either going to pay out of pocket, catch the bus, or ride a bike. Buffalo’s roads in winter do not accomodate thin, shallow race tires. I was saving up for a fatbike, but then some folks at CoworkBuffalo all but married me to a mid-1980’s Peugeot mountain bike with nearly 3-inch tires. 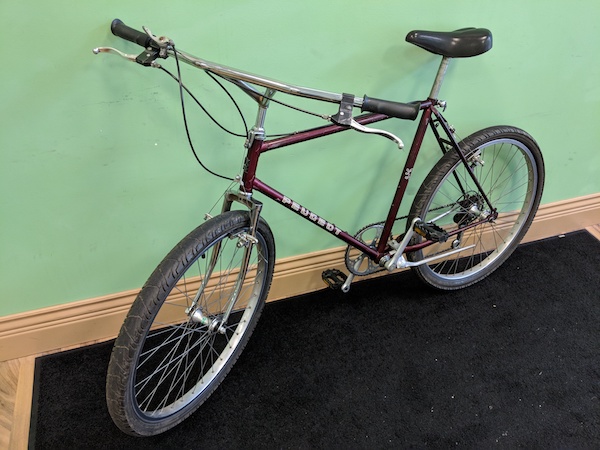 Some more reasearch, some trial and error, and now I sometimes ride around looking like this. Layers, my friends, layers. 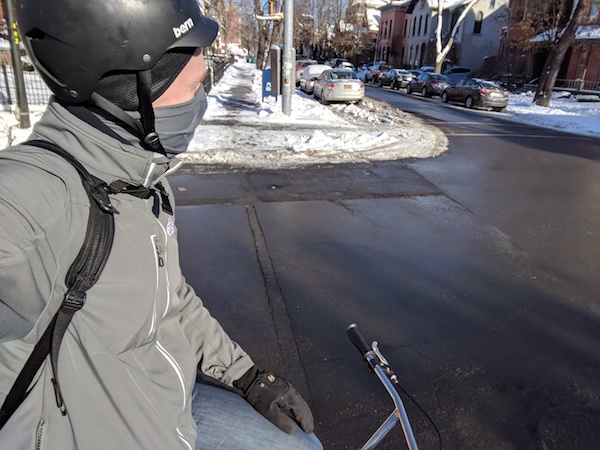 I aim to keep fixing up bikes, but more for other people, through the workshop at GoBike. I’ve never been mechanically inclined, but bikes, old bikes that need care, click with me. It feels good to rescue old bikes with work, with franken-pieces from junkers, or with the cheapest off-the-shelf parts of today that would astonish the original bike builder.

This past year, I:

Went nutty and reorganized my home network, so that I could:

Baked a lot of desserts. I baked my way through most of the regular cookies, nearly all the pies, and a few cakes in the America’s Test Kitchen cookbook and its T-shirt-and-jeans cousin,Cook’s Country Blue Ribbon Desserts. ATK/Cook’s recipes are very specific, have the ingredients by weight rather than volume, and you learn some basic tenets of baking by moving through them.

Here’s a whole bunch of photos of 2017’s desserts, if you can take that right now. I stopped taking pictures of chocolate chip cookies; there were probably a dozen batches last year.

I only wrote for my employer, Wirecutter, in 2017. I wrote guides to personal budgeting apps, dog crates, heating pads, and platform bed frames. I also rewrote and updated a lot of guides on the site. Good year.

I also spent a good bit of time reading about writing fiction, and reading books with a notebook near at hand, as covered in that Creative Mornings talk. More to come on that.

The last post I wrote on this site was the 2016 year in review. Well, okay.

I kept at it. Still doing Stronglifts/5x5. I worked through the year to recover from a back injury that I got from … I can’t believe it’s called “butt wink”. I got back to my nearly top weight again, and then my knee started hurting (see just below). I recovered, and now my squat form is such that my trainer said, on an off day at the gym, “Look at that form!”

Then again, he also told me I had been doing overhead press wrong for about a year, and now need to start over.

My right knee started hurting again in late 2017. With two surgeries in its past, sometimes it just can’t take what I want it to do: squats, deadlifts, biking, walking, and the like. I went back to physical therapy after it started bothering me something bad, and we worked on a range of flexibility, walking stride extension, and stuff that might be keeping the muscles around my knee from fully doing their job.

Weeks of sessions and at-home work later, and my squat form and balance are real good, y’all. But my knee still hurt. The likely truth is, it’s a minor, early arthritis, because there’s just not enough cartilage there. But, there is stuff called Synvisc, it is made out of chicken combs, and they can inject it into your kneecap. A little over a month later? I can deal. This is now my third favorite use of chickens, besides frying and curry.

The seventh annual event was run by a talented, hardworking crew, and I helped less than ever, intentionally. It was another sold-out show at Babeville, my favorite performance space in Buffalo. The talks from 2017 are good.

The coworking space, of which I am a co-owner, is in its fifth year of operation at its Main Street/Theatre Place location. We are quietly working together and inviting other people to join whenever they want. Oh, and I hear there’s a makeshift bike shop in the basement, if you know who to ask about it.

Why did I keep tweeting this year? This was some of the least-bad stuff the people enjoyed.

Pictured: A man who took an hour to fix the brakes on a kids' bike he couldn't stop himself from messing with. But for a good cause! https://t.co/ZgaXKJ0rOv

Shooting photos for work, then my dog posed for a front page story about how he's still looking for the killers, ALL THESE YEARS LATER pic.twitter.com/WaBKgGs6Cd

.@ginatrapani took an email from me when I was assistant editor of the weekend insert of a tiny newspaper, and listened to me ramble about Linux on a phone call while I kicked stones around the parking lot. Owe her a whole lot. https://t.co/G0z5DeFsaT

Via Buffalo subreddit (https://t.co/x3Hy8ZTS3V) old BN article, and @sparklebombbb, the short explanation of the cereal smells in Buffalo: pic.twitter.com/j7JAw8wW8j

Here’s what I played in 2017, more or less. I’m almost done with this post, so I’m too lazy to link them, but you probably can find them. 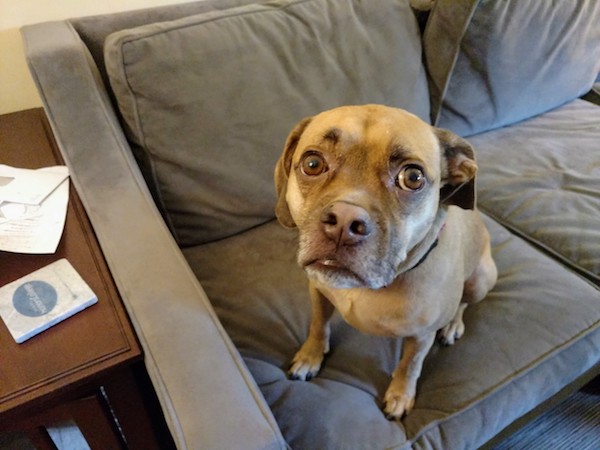 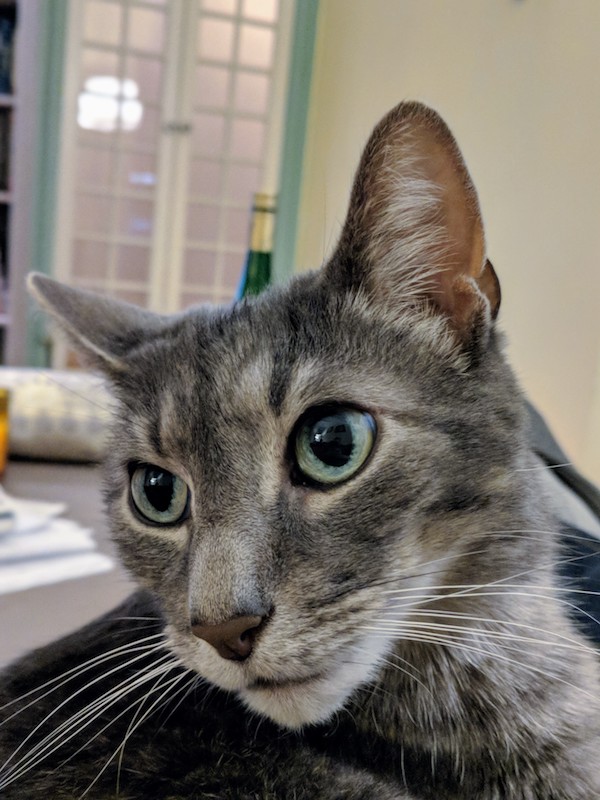 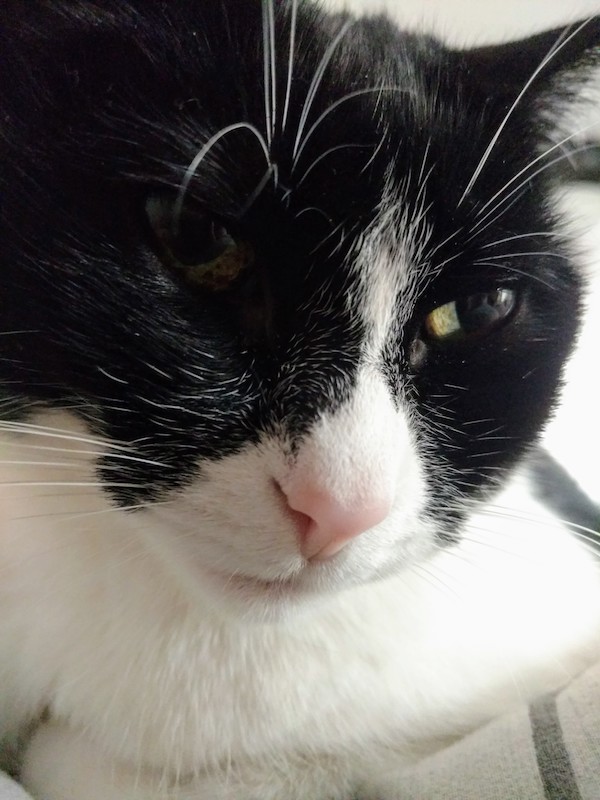